To biofacture colours for textiles 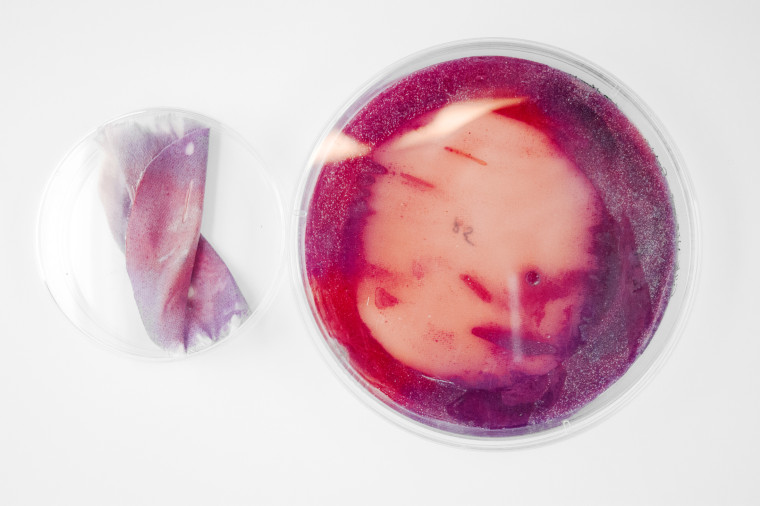 In Latin, ‘Homo Faber ‘ means ‘Man the Creator’ and is a philosophical concept articulated by political theorist Hannah Arendt (1906-1975) and philosopher Max Scheler (1874-1928). It refers to humans controlling the environment through tools. The French philosopher Henri Bergson also referred to this concept in Creative Evolution (1907), defining intelligence, in its original sense, as the “faculty to create artificial objects, in particular tools to make tools, and to indefinitely variate its makings.” I argue that never has the term ‘Homo Faber’ been so poignant a descriptive of humankind, as we find ourselves at the precipice of abundant changes through new emerging bio-technologies.

‘Faber Futures’ is a design project embodying a new age, a new craft which adopts extreme biotechnologies to challenge how we conceptualise materiality and indeed fabrication processes. Its context lies in a new age of ‘soft’ meets ‘hard’, i.e. where programmable cell biology meets more traditional technology. By growing bacteria as an ink factory and using traditional textile screen print techniques, ‘Faber Futures’ presents the first collection of textiles produced by traditional screen printing but using dyes produced by bacteria. The research is a work in progress, with the synthesis of bacteria to produce a predetermined colour chart as the ultimate goal. This project is a collaboration with Professor John Ward and his Lab at UCL, London.