To design a living factory 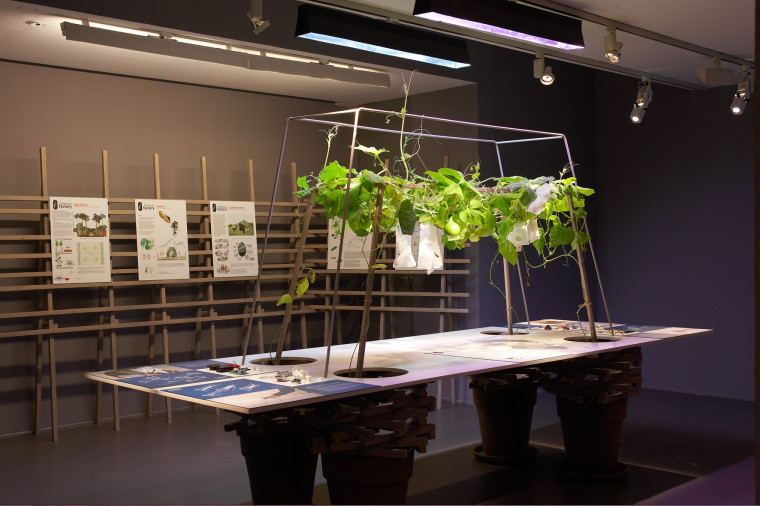 This workshop proposed to explore new modes of fabrication based on plants and involved a group of designers from the Ecole Nationale Supérieure de Création Industrielle (ENSCI), a design school in Paris, and from Central Saint Martins College in London. These modes are inspired by industrial, botanical and horticultural techniques rather than by the alteration of the plant’s genetic code, thus formulating a deliberate opposition to biotechnology and the increasing wish for biological control.

By playing with the environment of growth of plants and by investigating a new production timescale depending on seasons, it becomes possible to produce without altering, to guide without controlling, to predict without programming. Imagined in this way, the ‘Botanical Factory’ is able to generate products or semi-products in production chains of a new type. Production time is adapted to the plants’ growth to harvest products according to seasons.

By playing with the environment of growth of plants and by investigating a new production timescale depending on seasons, it becomes possible to produce without altering.

Several hypotheses have been formulated by the participants in the ‘Botanical Factory’ workshop, working on different varieties of plants and trees. In this exhibition we are presenting an example of a production chain of electronic objects composed of a moulded gourd body, along with other electronic components. Other plant varieties and botanical production methods were also investigated to feed the designers’ imaginations. This workshop led to new encounters between botany and industry in which objects can be simultaneously manufactured and ecofactured.

The ‘Botanical Factory’ workshop was led by Guillaume Foissac and Carole Collet with the participation of Dr Dawn Saunders, the CSM MA Textile Futures, and the support of the EDF Foundation.